According to Greek mythology, Minos was the son of Zeus and Europa. After abducting Europa from Phoenicia, Zeus took her to Crete.

There he had three sons with her, Minos, Rhadamanthus and Sarpedon. Minos in Greek mythology was the king of Crete. The kingdom of Minos included the whole of Crete, consisting of a hundred cities, and the Cyclades, which were called Minoides. The capital of the Minoan kingdom was Knossos, located 6 km outside Heraklion, Crete. There was the famous Palace of Minos, part of which is still preserved today. The Labyrinth was built by order of King Minos and was guarded by the Minotaur. Inside the Labyrinth, Minos imprisoned Daedalus, the constructor of the Labyrinth, with his son Icarus, because Daedalus had helped Pasiphae unite with Taurus and give birth to the Minotaur. Daedalus and Icarus escaped from the Labyrinth with the help of the wings that Daedalus had made for both of them, using feathers and wax. This is the first human flight in mythology! According to the Myth, Theseus went to Crete to exempt Athens from the blood tax they were obliged to pay to the king of Crete, Minos. Because Minos’ son, Androgeus, had been killed in Attica, the Athenians were obliged to send seven young men and seven young women to Crete every year to feed the Minotaur who lived in the Labyrinth. If Theseus exterminated the Minotaur using only his hands, the obligation to sacrifice young men and women would cease. There, Theseus met Minos’ daughter Ariadne, who fell in love with him and that is why she helped him by giving him a skein of thread, “mitos”, which Theseus unwound as he walked through the labyrinth of the Minotaur with the rest of the young men and women from Athens. After killing the Minotaur  he found his way out with the help of the thread again and left Crete with Ariadne. The name of the TERNA – GMR Joint Venture, Ariadne, was inspired by this myth, while the design of the terminal has references to the Minotaur and the Palace of Knossos.

The New Airport is ideally located in the center of Crete. 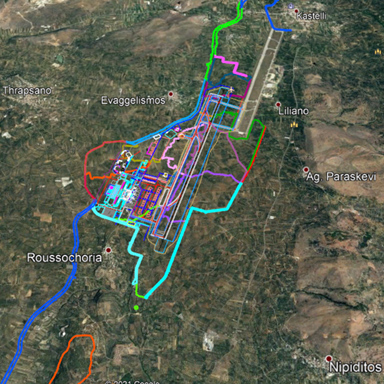 THE LOCATION
THE PROJECT

It is going to serve 10,000,000 passengers at the start, while during the concession period it is expected to exceed 18,000,000. It is a “green airport” with its own production and management of energy, while responding to the need to address climate change, emphasis will be placed on reducing the CO2 footprint. Another feature is the implementation of the highest criteria in the provision of Services, according to the specifications of internationally recognized organizations in the industry (ACI ASQ, IATA Optimum Level). The New Airport is intended to have a harmonious relationship with the local community and to promote it. For this reason, continuous actions in support of the local community and promoting the local cultural heritage are already taking place, while providing the visitor with a sense of the place and its unique characteristics. At the same time, as a modern infrastructure, the latest technology and innovative applications will be at the forefront, along with reaching strategic commercial agreements.

The International Airport is going to include a Commercial Zone accessible from the urban fabric, properly integrated in the wider residential and spatial development of the area of 200 acres. Regarding the access to the Airport, the first major connection of North and South Crete is achieved with the longitudinal axis that connect Hersonissos with Southern Crete, 25 km long, while upon the completion of the construction of the North Road Axis of Crete (BOAK) it is estimated the Airport to be accessible from Heraklion in less than 25 minutes. The start of the commercial operation is going to take place in 2025 and there will be 19 boarding gates, 8 of which will be of combined use for Schengen and Non-Schengen flights.

The Terminal is going to have an area of 90,000 sqm on the operation start date and it consists of 8 levels. Throughout the stay of passengers at the Terminal there is going to be biometric and automated control procedures, as well as facilities for entertainment, leisure, catering, prayer, baby and mother support, creating a unique sense of travel experience. Also, the Airport is going to have: